I didn’t think America was ever going to take black lives seriously in my lifetime. I’m close to thinking we might. There was finally a murder so slow and egregiously awful by police that it seemed fewer people came out to defend it than normal. People protested – which has happened before, but this time the police responded swiftly and brutally all over the nation, which helped more people realize the urgent need to demilitarize and defund or abolish police departments all over the nation.

More people have been murdered by police and by right wing activists. More people are seeing that there is significant infiltration of right wing racist groups into military and civilian armed forces like the police and the national guard. Significant effort seems to be put into either pretending the grievances we list are fake or that protesters are the same as rioters or into sparking riots to give a chance for crackdowns or to trigger broader societal conflict and breakdown.

The plague of systemic racism is getting acknowledged and the movement is being recognized enough to be co-opted. Many states have decided to paint a road with “Black Lives Matter” which is nice. None have revoked qualified immunity. Still, this co-option is a good sign – people are uncomfortable enough to start making the most basic gestures. DeBlasio still sucks. He can’t get the road painted in front of Trump Tower because he sucks. He and the City Council failed to defund the NYPD, instead shuffling money and police officers around.

Still the streets fill with people angry that they have to fight for simple recognition that black lives matter and the police are not here to protect or serve them. Even in the tiny village of Saugerties, people are showing up every day to stand vigil with their plague masks on.

I hope that we can skip reforms and channel some of our vast wealth into things that benefit people instead of control them.

In our home, we are much more settled into a routine. I’ve got a space to work. Max has rules around how he can earn precious screentime by doing workbooks or reading a new book. Zelda has similar… She’s learning to count and does M&M math with me because she’s insatiably into chocolate. Sam’s growing an impressive number of things outside, where the filthy dirt is. I’m no farmer, but it’s really nice to eat a sandwich with your own lettuce in it! Today she showed me where beans are coming up near some corn.

It’s been a ton of activity around here for home improvement. I’ve built a pretty large stone patio by leveling one stone at a time. Sam came up with the idea of putting an outdoor rug over it and it looks great – gotta finish the edges somehow though.

Sam’s gardening has been huge – we’ve got plants everywhere and it looks amazing. Together, we built some raised planters and they are full of the three sisters: corn, beans and squash. She tore out our old sink since there was a leak that screwed up the cabinet and we put in the replacement. We also tore out the old vent exhaust light and put in a new one – plus a better light for the entranceway. Sam bought a tiny washer and got it installed near the kitchen so we can continuously wash clothes. Speaking of continuously washing, we have to continuously wash dishes since we don’t have a dishwasher and don’t want to be set upon by insects.

We celebrated July 4th in style with a TON of fireworks. The neighbors applauded.

I’m working too many hours because work bleeds into everything when it is so close. I also think we are all sick of sitting around the house – the newness has worn off and we crave change. I started running with Zombies, Run to explore the neighborhood. I registered for a virtual fitness championship, and tomorrow afternoon I’m going to try to submit my first workout.

Weâ€™re still getting out and exploring.

That picture is from earlier on the 4th. To get here you park your car by the side of a road on the path through the Catskills on the way to hunter mountain. You hop a guardrail and navigate the rock fill to get down to this paradise of mountain streams and waterfalls everywhere.

Hike down a bit and we came to little pools dug into the bedrock, natural water slides and everywhere it was gorgeous.

It was amazing. The mostly black and brown families around us had managed to bring music, barbecues, hookahs, kids – it was amazing. We left as it got packed. When I got to the road, of course the police were ticketing and towing cars. We got a $75 ticket.

The federal government is paralyzed from the top down, offering no solutions, only misinformation and confusion. As NY is beginning to be less wildly dangerous, other states are beginning to see their lax policies have the same payoff as Cuomo and DeBlasio’s initial bungling. Here in Saugerties I see some restaurants reopening with “social distancing” but it’s very poorly observed. Here’s an idea: people can’t be trusted to make smart decisions when they are drinking. So no wonder I’m seeing even in big open spaces people hopping from group to group, saying hello and hugging with masks around their necks. Places that haven’t seen ice trucks holding bodies are probably going to have to experience it for themselves.

I told Max we might not be back in Brooklyn for a long time or that we might sell our place so he could have a place with a backyard and more room. He seemed heartbroken by the idea – I think I really messed up. He could articulate that he missed it and it was special to him. But given that we think thereâ€™s very little chance the schools can safely reopen by September, what can we do? I think about how I never felt attached to the second place we moved to in Colatown.

As always, our problems pale in comparison to whatâ€™s happening around us.

Since my internet connection is crucial to my work these days, I wrote a little utility to graph ping time so I can see if things are going wrong early. Iâ€™ll neaten itâ€™s up and share it.

Just looked up and realized itâ€™s tomorrow so Iâ€™m gonna schedule this to publish in a few hours and get some sleep. Let this be a reminder to me to never mess with .htaccess rules again. Regine has a lovely interview with Thomas Thwaites 1 about a future where the police hunt growers of hallucinogenic plants via special bees.

How did the pollen forensics researchers react to your project?

In general the reaction was that it was almost believable… which is the reaction you want for a futures project I think. A plant geneticist, (who’s ‘Crash Course in Synthetic Biology’ I later crashed) saw the project and said he’d thought about taking genes from the Marijuana plant and putting them into a tomato plant (being a respected scientist I’m sure he wasn’t saying he’d thought about ‘doing it’, just ‘about it’).

And this gem of what’s actually happening now to translate pollen to crime:

Are the police in the UK already using pollen forensics?

Yes, and its been pretty instrumental in several very high profile cases. There’s this lady called Pat Wiltshire who is the police’s go-to person for pollen forensics. She can look at a sample of pollen from clothes or whatever, and visualise the landscape it’s from – a filed of maze, with a river next to it, and an oak tree in the middle – or something like that. The impression I got about police work when I was interviewing James, and a detective, was that it’s really arduous. Pollen forensics would be one detail in many that would lead to cracking a case, and as importantly, proving it in court.

This high weirdness is definitely part of the adjacent possible, one of those strange futures that hasn’t happened, but should.

He’s the guy who tried to make a toaster out of raw materials, start to finish
I loved this book.
Forget my review and go get it now, it’s wonderful.Â 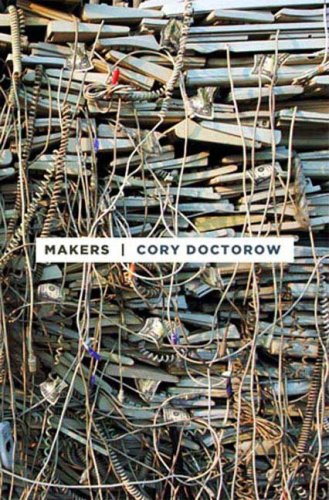 If you don’t have the scratch right now, that’s ok: Â Cory Doctorow walks the talk and has published his book under a creative commons license. Â You can get “Makers” for free at his site as a pdf, as html, ePub, or as an audiobook. Â Just go get it and read it. Why?
The characters felt right and true and good and wonderful, like people you’ve always wanted to be friends with. Â It’s the story of people playing around and doing the creative work that felt right to them, pushing to stay free and work on beautiful things. Â Their hard work takes a damn beating from the world around them and they rise up after that beating.

How fortunate that someone was there that single time to film it!

Watch to the end and relish the beauty of the last sentence. Via Boing Boing.

I am intrigued by this weird advisory on cryptome, keeper of, if not all, then at least exclusively, things you are not supposed to know. There’s no attribution, no explanation, and no other mention of this on the web.

The very short gist is:

Avoid the treacherous anonymous web browser, bangotango.com. It is harvesting unwary user addresses. It is operated by triumphpc.com as a law enforcement/intelligence sting.

It would be an interesting concept, if only because it has such problems with the idea of entrapment. The idea that the some agency could make the promise of proxied worry free browsing, even going so far as to include the text of the 4th amendment on the website, and then use evidence gathered there in court is boggling.