From this Gizmodo’s How a lone coder cloned google reader.

Go Read is a web-based RSS reader.It is designed to be as useful as Google Reader.

When you built your house on sand and then you find your house collapsed, it doesn’t seem so smart to rebuild your house on sand, but taller. So I just wonder about writing your google reader clone in a language designed by google and hosting it on a hosting platform run by google, where the only way to sign in is to use google.

The FCC has a tool you can use to find out if your broadband provider is advertising better speeds than they provide.Check it out over at Broadband.gov.

This seems like a nice crowdsourced way to catch cheats. It will work better the more people participate, so go over and take the test.

Also of interest is that they are using open source software to provide the tests – software that can be independently verified.

A friend recently wrote me about a strategy he heard for exploiting market volatility.  I get these questions sometimes because I’m in finance, and because I’m in finance let me be up front.  I’m not giving you financial advice here.  I’m not an advisor, I’m not competent, you should probably close this page now and burn your computer.  Past performance has no correllation with future performance, as everyone should have learned in, oh, 2008.

That said, let’s have a little fun with these ideas.  To paraphrase my pal’s email:

Apologies in advance for what I hope is a not-too-complicated financial question.  So you ever heard of something called volatility drag?  Something to do with how over time double- and triple-leveraged ETFs always lose money. I found an investment opportunity that uses this principle to make money.  The pitch I heard says that the strategy is sound and has data to back it up since the 90s.  I find it hard to believe that something that automatically mints you money (admittedly at a “watching paint dry” pace) exists, yet it seems so from what I can tell…

I hadn’t heard of volatility drag before but it was fun to learn about.  Under the fold:  Charts! Definitions! Sage Advice! Links to books!

END_OF_DOCUMENT_TOKEN_TO_BE_REPLACED

Don’t try to dodge the recession with grad school.. Many of my friends are considering this sort of move. It’s a sucker bet for a number of reasons that Penelope outlines. My basic argument is her last one.

Graduate school forces you to overinvest: It’s too high risk.
In a world where people did not change careers, grad school made sense. Today, grad school is antiquated. You invest three to six extra years in school in order to get your dream career. But the problem is that not only are the old dream careers deteriorating, but even if you have a dream career, it won’t last. You’ll want to change because you can. Because that’s normal for today’s workplace. People who are in their twenties today will change careers about four times in their life. Which means that grad school is a steep investment for such a short period of time.

You put in many years of avoiding adult life and prolonging adolescence, then commit to a career you have no real idea about. When I thought I might want to be a lawyer, I worked for a law firm and was firmly told by many lawyers that this is the worst job ever. When I thought I wanted to be on the news, I became a news reporter and learned why the news structurally has to be terrible. You learn more by doing.

Of course, that’s coming from a guy who hasn’t gone to graduate school. I still think though, that if you are lost, or unsure, the general best bet is to say yes to lots of opportunities and ditch the ones you hate. You will get somewhere by staying in motion, and learn more things. 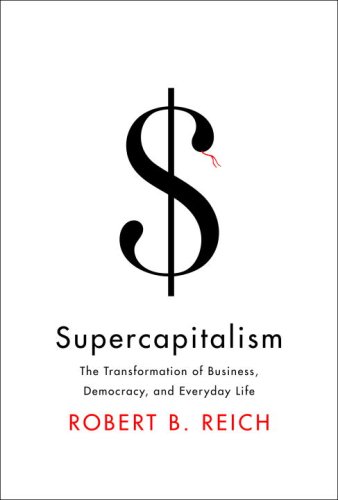 Robert Reich wrote a very surprising book on the interplay of capitalism and democracy. His argument is that we’re seeing a lot of problems in our democracy because we have demanded too much of corporations. If, instead, we strip away some of our fiction that corporations are people, we won’t expect them to be noble, or fair, or honorable.

Instead, we should see corporations for what they are. They are legal contractual agreements between groups of people in order to generate profits. They have no purpose or concern other than the flow of capital and profit. Just as we don’t ask a gun to distinguish between good directions to shoot in or bad directions to shoot in, we shouldn’t ask corporations to do anything but obey our laws and generate as much money as they legally can.

People can say things like: “I quite like cheap sneakers, but I don’t want to allow anyone to employ children to make them.” Corporations can’t do that. So people can get together and decide what rules corporations play by.

Now, this is good. It’s a good thing to have a book that connects the dots between corporate influence on politics, the changing marketplace, the economics of globalization and the legal concepts underlying corporations. I just wish it didn’t take so long. The last chapter, “A Citizen’s Guide to Supercapitalism” contains the only real proposals and it is 16 pages. The previous 208 pages are all lead-in. Frankly, I got it early on. The book didn’t need quite that much paper.

To be fair, I did have some good insights while reading.

Doing some last minute shopping for Sam and ran across Apartment Therapy’s post on Party Density.

Seems like they’ve got it down. I’m having a dinner party on December 25th, I’ll have to check the math for the space…

The unanswered question, of course is how many people you should invite to achieve good density of people who actually show up. One strategy of mine is to make my invitations personal if possible rather than sending out a mass evite. People I like will tell me if they are coming or not and I know what’s going on that night.

I don’t throw barnstormers in my living space anyway. I’d rather throw them at other people’s apartments and pay for food or liquor and they provide the space and the cleanup the next day.

Been reading a lot about spam problems lately.

It isn’t a problem for me, since I’m not a high value target for spam. The other reason is that I’ve raised the bar by a very tiny amount. CAPTCHAs (those type the letters in the picture tests) are designed to raise the bar for spammers, and I’ve got kind of a unique one on this blog.

My comments aren’t hosted on blogspot, but rather on a site called haloscan. That tiny little difference has meant that I have never displayed a single comment spam ever. Automated comment spam occasionally is done, but it is always done using the normal blogspot comment fields. I get notices of these when they happen, but they aren’t a worry because they aren’t displayed ever or crawled by search engines.

This works because spam is a problem of economics. It takes very little work to be not worth the effort.
This is also a reason that firefox tends to be more secure than ie6. Fewer folks use it and therefore its less lucrative to write firefox exploits. So one of the surprising things that would tend to make ie6 and the web more secure is if opera, safari, and firefox took off!